• Two-year-old boy and sister, four, found in flat
• Mother had recently moved out of family home 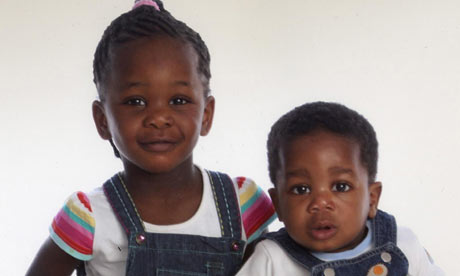 Two children have been found murdered at their home in Manchester and their father has been arrested, police said today. Theo Molemohi, two, and his sister Yolande, four, were found unconscious at a flat in Whalley Range, two miles south of the city centre, just after 8am today

A 37-year-old man, believed to be the children's father, who was in the flat with them, was arrested on suspicion of murder. He later collapsed while in police custody and was taken to hospital.

Attempts were made at the scene to resuscitate the children, but they were already dead. Postmortem examinations are being carried out. Reports suggest the children were strangled.

Detective Superintendent Geoff Wessell, of Greater Manchester police, said the children's parents were estranged. The children spent the weekend with their father and were due to be picked up by their mother today.

He said: "They were found in a bedroom with the father there next to them. He lived at the address. His ex-partner recently moved out and had agreed to let the father look after the children for the weekend. She had gone back for clothes and let herself in and was confronted by this traumatic scene. This was a traumatic incident for the family and the officers that attended."

Wessell revealed that after his arrest the children's father collapsed and was taken to hospital. He said the children's mother, believed to be studying for a PhD, was "extremely distressed" and was being comforted by family liaison officers.

A neighbour said she saw the man as he was arrested. She said: "As I was leaving for work this morning, they were handcuffing him. He went calmly."

She described hearing "terrible noises" shortly before the arrest.

She described the children as "nice kids".

Patrick O'Connor 31, a student electrician who lives in the neighbouring block of flats, said: "I am shocked. It seems like a nice block of flats, there are families living all around here.

"It's giving me the goose bumps just standing here. It's not a nice thing to wake up to something like this. As a father it's just very upsetting. It's horrible."

Mussie Gebremariam, 32, who lives in the same block of flats, said: "I have lived there for over a year. I knew the mother just to say hi and I've often seen her playing with the children.

"They seemed very happy. I never heard any arguments. The children were often running around at the weekend and the door was always open."

The three-storey block where the children were found, Lansbury House, is managed by Contour Housing, according to a plaque outside.

Another resident, Sophie Partington, 34, said: "They were just a normal happy family. The kids were always playing out on the grass outside. The kids were lovely, cute little kids.

"He was finding his feet and she was starting school. She was a lovely little girl with a brand new school uniform. She looked really smart, and I thought 'they must be really proud'."

She said a neighbour took the children to a harvest festival at a local church on Saturday and they enjoyed face painting and had a "lovely day". She added that the children seemed really happy and well cared for and said: "I can't understand how something like this could happen."