Angry, Radical Men's Groups - They Are Dangerous And They Need To Be Stopped.

Attack of the 50-Foot Feminist Agenda

Angry, radical men's groups believe males are being victimized by out-of-control judges and politicians. They're wrong and they're dangerous and they need to be stopped. 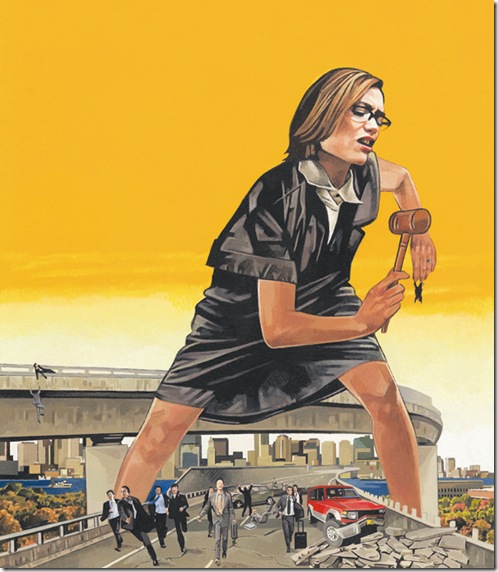 Every Wednesday at noon, the Governor’s Council gathers at the Massachusetts State House. The eight-member council is an elected but little-known body that serves as the governor’s advisory board; oversees things such as pardons; and approves or rejects appointments for state judgeships. That means it has a lot of influence on how state laws wind up getting interpreted and carried out.

Amid the smattering of lobbyists and state officials at council meetings, there is always a member of the Fatherhood Coalition, a Massachusetts-based organization that was founded in 1993 to steer state laws in a direction more favorable to fathers. Sometimes it’s Joe Ureneck, the group’s chairman, who attends. He’s a small-business owner who, while going through a divorce, became concerned with the system’s “sexist bias.” Other times it’s Patrick McCabe, a soft-spoken part-time accountant from Hyde Park whose divorce left him similarly disturbed. McCabe, in fact, is running for a seat on the council this November.

Ureneck and McCabe aren’t exactly shy and retiring at the meetings. Along with the rest of the Fatherhood Coalition, they do their best to shut down judicial nominees they view as insufficiently sympathetic to their agenda. A nominee, for instance, like David Aptaker, who in 2010 was up for a position as a Middlesex probate judge. As a bit of background, one thing the Fatherhood Council is particularly concerned about is restraining orders, which it insists are used in a way that’s biased against men. In fact, the group has been pushing legislation to change the system. That’s why the coalition was alarmed by Aptaker’s nomination—according to a post on its website, Aptaker’s “lack of understanding of the restraining order laws made it clear he was not fit for the bench.” So after discovering that the nominee had failed to disclose donations he’d made to two disgraced politicians, the Fatherhood Coalition showed up at a public hearing, registering complaints that he couldn’t be trusted because of his donations. Under pressure, Aptaker eventually withdrew his application. “Whether you agree with them or not, their point of view has become the elephant in the room,” says Mary-Ellen Manning, a council member from Salem. Watertown’s Marilyn Petitto Devaney, who’s been on the council for 14 years, says the presence of the Fatherhood Coalition has “changed the way we do business here.”

Aptaker’s story underscores a disturbing trend: Men’s rights groups, convinced that men are the biggest victims of modern society, have been busy attacking, defunding, and repealing laws that have been very effective at protecting women and lowering rates of domestic violence. And rather than just ranting and raving on the Internet, these men have been pulling political levers to change both state and federal laws. That they’ve done so with remarkable success ought to make everyone very, very scared.

If your last memory of men’s groups is Robert Bly and the boys banging on drums in the woods, you likely have no idea how the movement has mutated. Today, men’s rights groups tend to be organized around the belief that this country has launched a “war on fatherhood.” To them, the rise of feminism resulted in the fall of man, with males now being relegated to the periphery of society. In their eyes, the media portray men as feckless buffoons, legislative bodies unfairly target them, and biased courts blindly punish guiltless husbands. (Full disclosure: I was a producer of the 2011 documentary No Way Out But One, which examined the family court system.)

Nationally, groups like Stop Abusive and Violent Environments (SAVE) and A Voice for Men have helped slow the renewal of the Violence Against Women Act—which would provide $660 million in funding for shelters, legal aid, and other programs to protect battered women—by convincing conservative House Republicans that the law shouldn’t include immigrants, Native Americans, and LGBT victims. SAVE claims the law is biased, noting in a fact sheet titled “Seven Key Facts About Domestic Violence” that “female initiation of partner violence is the leading reason for the woman becoming a victim of subsequent violence.” In other words: She was asking for it, officer.

Locally, the Fatherhood Coalition (which has seven active chapters and a few hundred members across the state) is joined by Fathers and Families, a “family court reform” advocacy group founded in 1998 that now has 50,000 e-mail newsletter subscribers. Fathers and Families claims to have the “largest membership base, the highest media profile, the most funding, and the most successful legislative representation of any family court reform organization.” It’s a bold claim—and quite accurate. In 2001, for example, the group won changes in Massachusetts law that lowered child support by 15 percent.

Then, last year, Fathers and Families and the Fatherhood Coalition achieved a major victory with the passage of the Alimony Reform Act of 2011, which removed the requirement that men pay alimony after retirement. The success of that bill allowed them to fine-tune their technique of advancing legislation: Get the governor to appoint a task force to examine the issue, secure a seat on the task force, influence the ultimate consensus, and then send it to the legislature.

Also last year, the men’s groups tried another approach to changing laws: submitting a ballot initiative. They had hoped to use that strategy to overturn 209A, a law that seeks to prevent domestic violence by allowing judges to grant emergency protective orders to men or women who have a reasonable fear of harm from another person, often a partner. That law is stacked against men, according to Ureneck, who also helms the Massachusetts Citizens for Immigration Reform, a conservative group advocating for tougher enforcement of immigration laws. “The fundamental idea behind 209A,” Ureneck tells me, “is that men are inherently batterers and women are fundamentally victims.” Ultimately, Attorney General Martha Coakley shut down the group’s attempts to overturn the law via ballot initiative because the state constitution doesn’t allow such initiatives to deal with the “powers of courts.”

Now, men’s rights groups are pushing another bill that would change court guidelines in custody proceedings, moving from the standard of doing what is in the best interest of the child to making shared custody the default. That sounds reasonable enough—good parents should certainly be able to play a meaningful role in their children’s lives after a divorce—but the proposed law has no provision for judges to determine whether one of the parents was violent in the relationship, which is a pretty glaring hole. And studies show that shared custody is one way that emotionally abusive spouses often seek to extend their control after a marital breakup.

In spite of that, men’s groups have convinced more than a quarter of Massachusetts House members to cosponsor the bill. In the face of that pressure, Governor Patrick in July appointed 18 people to the Working Group on Child-Centered Family Laws, which is examining current regulations and trying to come up with a consensus on future guidelines. Men’s rights groups, including the Fatherhood Coalition and Fathers and Families, managed to get three of their members in the group, but there are no representatives from mothers’ groups. (One member comes from a domestic violence organization, however, and another from the Women’s Bar Association.)

“They’re organized,” says a Beacon Hill insider. “They’re vocal, they can be vociferous…and they’ve capitalized on the success they had with the reform alimony laws.”

And men’s groups are having successes like this all over the country. Rita Smith of the National Coalition Against Domestic Violence told the Southern Poverty Law Center’s Intelligence Report that such groups have “taken over the courts,” and that they have “been able to get custody evaluators, mediators, guardians ad litem, and child protective service workers to believe that women and children lie about abuse.”

Let’s be clear: There is no “war on men.” It’s true that the family courts should be better staffed, and better trained to sort out the truth, assess the risks, and ensure that kids are kept safe, happy, and healthy. And men’s groups certainly have every right to try to change the law. That’s how democracy works.

But that’s all the more reason that civil rights and women’s groups need to wake up and get involved, something they’ve been slow to do. When I spoke to Toni Troop of Jane Doe Inc., a Massachusetts sexual assault and domestic violence advocacy group, she assured me that “People see through their rhetoric and their repeated attempts to undermine safety for the real victims of domestic violence.” Really? Then why have they been so successful at changing the law? More women’s and mothers’ groups need to start attending these meetings and demanding a seat at the table.

They also need to remember how bad the past was. Back in 1993, before the passage of the Violence Against Women Act, then-Senator Joe Biden conducted a three-year investigation into the causes and effects of violence against women. Afterward, he issued a searing report that helped lead to the 1994 passage of the original bill. In that report, Biden wrote, “…violence against women reflects as much a failure of our nation’s collective moral imagination as it does the failure of our nation’s laws and regulations…it deserves our profound public outrage.” Nearly 20 years later, it’s time to get outraged again.