THE WOMAN SUFFRAGE TIMELINE What does the future hold?

The following timeline gives the highlights of information you can find in the History of Woman Suffrage Book List.  The 1848 Seneca Falls Women's Rights Convention Declaration of Sentimentsalso can be found on this site.

1776 Abigail Adams writes to her husband, John Adams, asking him to "remember the ladies" in the new code of laws. Adams replies the men will fight the "despotism of the petticoat."

1780 Women lose the right to vote in Massachusetts.

1784 Women lose the right to vote in New Hampshire.

1787 U.S. Constitutional Convention places voting qualifications in the hands of the states. Women in all states except New Jersey lose the right to vote.

1792 Mary Wollstonecraft publishes Vindication of the Rights of Women in England.

1807 Women lose the right to vote in New Jersey, the last state to revoke the right.

1836 Angelina Grimke appeals to Southern women to speak out against slavery.

1837 The "Pastoral Letter of the General Association of Massachusetts to the Congregational Churches Under Their Care" is promulgated against women speaking in public against slavery, it is mainly directed against the Grimke sisters.

1840 World Anti-Slavery Convention in London. Lucretia Mott, Elizabeth Cady Stanton, and other women barred from participating on account of their sex.

1848 First Women's Rights convention in Seneca Falls, New York. Equal suffrage proposed by Elizabeth Cady Stanton. After debate of so radical a notion, it is adopted. Declaration of Sentiments.

1861-1865 Civil War. Over the objections of Susan B. Anthony, women put aside suffrage activities to help the war effort.

1867 Fourteenth Amendment passes Congress, defining citizens as "male;" this is the first use of the word male in the Constitution. Kansas campaign for black and woman suffrage: both lose. Susan B. Anthony forms Equal Rights Association, working for universal suffrage. Suffrage Movement Divides Over Black v. Woman Suffrage.

1868 Fourteenth amendment ratified. Fifteenth Amendment passes Congress, giving the vote to black men. Women petition to be included but are turned down. Formation of New England Woman Suffrage Association. In New Jersey, 172 women attempt to vote; their ballots are ignored.

1869 Frederick Douglass and others back down from woman suffrage to concentrate on fight for black male suffrage. National Woman Suffrage Association formed in May with Elizabeth Cady Stanton as president. American Woman Suffrage Association formed in November with Henry Ward Beecher as president. In England, John Stuart Mill, economist and husband of suffragist Harriet Taylor, publishes On the Subjugation of Women. Wyoming territory grants first woman suffrage since 1807. Civil Disobedience Is Tried.

1870 Fifteenth Amendment ratified. The Grimke sisters, now quite aged, and 42 other women attempt to vote in Massachusetts, their ballots are cast but ignored. Utah territory grants woman suffrage.

1871 The Anti-Suffrage Society is formed.

1872 Susan B. Anthony and supporters arrested for voting. Anthony's sisters and 11 other women held for $500 bail. Anthony herself is held for $1000 bail.

1873 Denied a trial by jury, Anthony loses her case in June and is fined $100 plus costs. Suffrage demonstration at the Centennial of the Boston Tea Party.

1874 Protest at a commemoration of the Battle of Lexington. In Myner v. Happerstett the U.S. Supreme Court decides that being a citizen does not guarantee suffrage. Women's Christian Temperance Union formed.

1876 On July 4, in Philadelphia, Susan B. Anthony reads The Declaration for the Rights of Women from a podium in front of the Liberty Bell. The crowd cheers. Later, the suffragists meet in the historic First Unitarian Church.

1882 The House and Senate appoint committees on woman suffrage, both report favorably.

1886 Women protest being excluded from the dedication ceremonies for the Statue of Liberty. Suffrage amendment reaches the U.S. Senate floor, it is defeated two to one.

1890 The NWSA and the AWSA merge to form NAWSA. The focus turns to working at the state level. Campaign loses in South Dakota.

1900 Carrie Chapman Catt takes over the reins of the NAWSA. 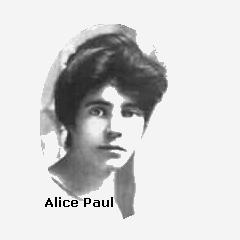 1907 Harriet Stanton Blatch, Elizabeth's daughter, forms the Equality League of Self Supporting Women which becomes the Women's Political Union in 1910. She introduces the English suffragists' tactics of parades, street speakers, and pickets.

1913 Women's Suffrage parade on the eve of Wilson's inauguration is attacked by a mob. Hundreds of women are injured, no arrests are made. Alaskan Territory grants suffrage. Illinois grants municipal and presidential but not state suffrage to women.

1916 Alice Paul and others break away from the NASWA and form the National Women's Party.

1918 The jailed suffragists released from prison. Appellate court rules all the arrests were illegal. President Wilson declares support for suffrage. Suffrage Amendment passes U.S. House with exactly a two-thirds vote but loses by two votes in the Senate.

1919 In January, the NWP lights and guards a "Watchfire for Freedom." It is maintained until the Suffrage Amendment passes U.S. Senate on June 4. The battle for ratification by at least 36 states begins.

1920 The Nineteenth Amendment, called the Susan B. Anthony Amendment, is ratified by Tennessee on August 18. It becomes law on August 26, 1920.

Women gained the vote in 1920 after 72 years
of the LARGEST civil rights movement
in the HISTORY of the world.

What does the future hold?